Til You’re Home (From A Man Called Otto Soundtrack)

with Sebastián Yatra OUT NOW!

Rita Wilson celebrates two major milestones with the release of her fourth new studio album, Halfway to Home, out via Sing It Loud/The Orchard, as well as being honored with the 2,659th star on the Hollywood Walk of Fame today. The star will be dedicated in the category of Motion Pictures, and the event will be live-streamed exclusively on www.walkoffame.com at 11:30am PDT, featuring guest speakers Tom Hanks and Julia Roberts.

Where her recent acclaimed record Bigger Picture was spare and intimate, its follow-up Halfway to Home stakes out new sonic territory – the place where Southern California rock meets Nashville country. Rita explains the significance of the title; “Everybody is a work in progress. I don’t feel that we’re ever at the place we want to be. Just when you think you’ve got it made, something throws you for a loop. I know I’m not perfect, but I just keep trying—I’m out there, flawed, but trying my best. So I wanted to write about connecting to those parts of you that aren’t finished, they’re just ‘halfway to home.’”

Halfway to Home is the second in a series of three new records from Rita, who continues to establish herself as a significant, prolific singer-songwriter. Of the new album, CMT raves, “One listen in, and you just know this is not some one-off passion project for Wilson. It’s genuine, and she’s poured her heart into every song. There’s something about her voice that sounds familiar but also unique. Sometimes it’s moody, sometimes it has a more halcyon rhythm. Even better, Wilson has the sense of humor that only comes from being grown up and thoroughly self-assured.”

The first single, “Throw Me A Party,” premiered with Rolling Stone who called it “inspiring” and “evocative,” while the music video premiered exclusively with People, who urged viewers to “grab the tissues,” when watching the “moving” clip. The video was directed by Patrick Tracy, CMT-winner and CMA/ACM nominee for his video for Dan + Shay’s hit “Tequila.” “Throw Me A Party” depicts Wilson’s journey following her breast cancer diagnosis in 2015. She explained to People, “One of the things I told Tom was that If I should go before him, I wanted him to be sad for a very long time, and that I wanted a party, a celebration. I wanted music and my family and friends singing and dancing. I wanted fireworks and sparklers. There is a time for tears. And a time to celebrate.”

Additional stand-out tracks on the new album include “Big City Small Town Girl,” singing about her own upbringing as a Hollywood native; the cheeky “Oh, No, You Didn’t”; “The Spark,” about the ups and downs of long-term relationships, and the dramatic “New Girl,” empathizing with a victim of infidelity.

Rita will be performing at such notable upcoming music festivals as Stagecoach (April 27), CMA Fest (June 6) and Lake Shake (June 21). Tune in next week for her performances on CBS’ The Late Late Show w/ James Corden on April 1 and NBC’s Today on April 5.

“Halfway To Home” is available now! 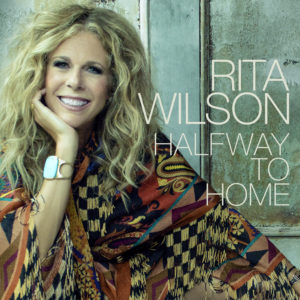