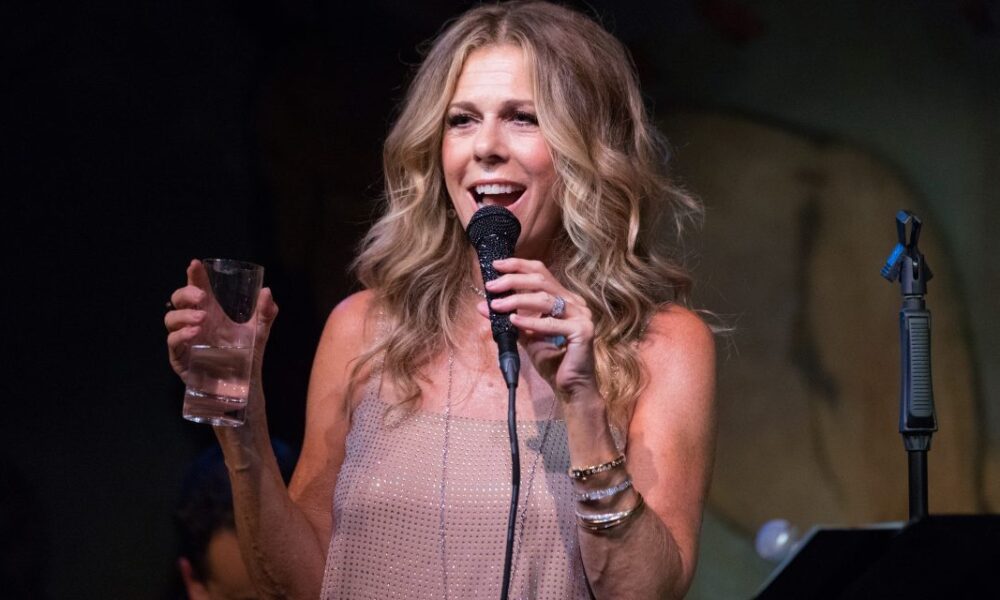 I didn’t know from Rita Wilson until last night. Where have I been? Wilson is, in a word, a jewel. She is strong, confident, genuine and generous. Listening to her makes you want to sing. She has the kind of voice you not only want to listen to, you want to climb into a convertible and sail down a summer road with her voice as a the soundtrack.

Her current presentation at the Carlyle features her own music from her sophomore album and selections from her third that will be out in 2018. She is backed up by a phenomenal set of musicians Andrew Doolittle – acoustic and electric guitars, mandolin, ukulele and vocals; Alexander Navarro – piano, keyboards, acoustic guitar and vocals; Lee Nadel – bass; briane Dunne – drums. The nuances are many and the precision is pinpoint.

Wilson starts out the evening explaining that she had strained her voice – an unnecessary inclusion as she delivered the goods for the rest of the night. Music is an extreme passion. The daughter of immigrants, she grew up in the Hollywood Hills trying to be a cool person. Big City Small Town Girl is a little bit country and a little bit rock and roll. Her childhood slides past us like the landscape seen from a train.

Ode To Billie Joe, Harper Valley PTA were the Dateline NBC news-bites of her childhood. Country music has the stories she loved and that she still relies on.

Floating on a Feeling is a luscious popsicle of love. Singing is like therapy except you can go over the hour and people actually listen. At this stage, when things are going fast, it is good to reflect on who we are and how we got here. Bigger Picture pulls the past into the present with renewed appreciation. This is followed by a song co-written with Darrell Brown (not listed in the set list so I don’t have the name) If I let go of being right, can you let go of trying to win, cause we have further things to prove…. – backed up with a beautiful vocal by Andrew Doolittle. This ditty hits home for everyone in the room.

Pay Me In Wine is the story of a woman who has advice to dispense as she takes payment by the glass. Been there. Done that, she tells us. New Girl is the song from the woman being cheated on to the current holder of the man’s attention. Shattering.

You’re Not The Boss of Me is all of that delivered with a rock and a roll. Made me want to pick out that convertible and pop that on song on LOUD.

A tribute to Barbara Cook reminds us that as she was passing her friends came to sing to her around her bed. Music is the fabric of our lives as the saying goes. Her own reflecting on life caused her to write Throw Me A Party – instructions for her friends for what to do after Wilson leaves the planet.

She encores (which she says is French for “Clap for me some more”) with Along For The Ride – a kind of honky tonk salute to friendship and joy and swinging along life’s path. She encourages us to support the waitstaff, which is a mighty force. And delivers slips in Song For Everyone (with a sliver of Debbie Brothers) on a golden platter.

A delicious way to end a day filled with stupid politicians and even stupider men who think they are the center of the universe. A woman who reassures us, serenades us and lifts us up.