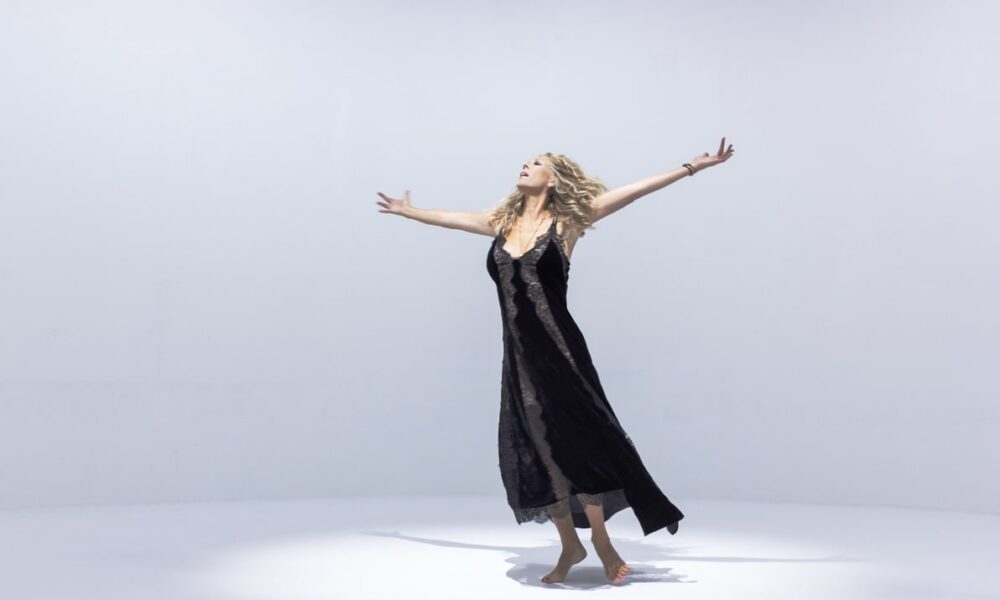 The lyrics of the introspective ballad, “Bigger Picture,” by Rita Wilson could be written about, and for, all of us:

Took an old scrapbook off a closet shelf.
Dusted off the cover, dusted off myself.
Laid it in my lap and I opened it up.
To find who I am and who I was.

It’s the title track from her new album of the same name—also her third album—available for pre-order now and out September 28. She co-wrote songs with Nashville notables including the Warren Brothers, Kristian Bush andDarrell Brown.

Wilson’s also headed out on tour, which makes us wonder, “How does she do it (all)?”

In addition to being an accomplished singer/songwriter, Wilson, 61, is an actor, Broadway star, film producer, activist, painter and writer, as well as wife of Tom Hanks, and a devoted mom. She spoke joyously about making this album and how it fits into the energizing creativity that is central to her life.

The album is your voice without a lot of percussion, synthesizer or other noise to prop you up. It’s just you. How does that feel?
That’s one of the things that scares me. It’s a vulnerable, intimate album in terms of instrumentation—acoustic guitar and piano. (Featured musicians include Bryan Sutton on guitars, and Matt Rollings on keyboards.)

I’ve always loved ballads, and always been a person who’s attracted to stories and storytelling in songs. This is homage to all those people I grew up listening to and was inspired by. I hope my stories will resonate with people.

It’s clear you pay attention to detail and organization in your life and don’t rush. How long did you work on this album?
I’d been continuing to write ballads and then producer Fred Mollin and I decided to cut “What the World Needs Now is Love” by Burt Bacharach and Hal David and “The Wind” by Cat Stevens. We’d worked together on my 2012 album AM/FM. I asked him what he thought of these other ballads, about looking back at your life. I think they’re evocative of scrapbooks, photo albums, and when you look back at your life it can make you very happy. Or sometimes it can make you sad if you have a loss if the kids are grown up and gone, friends got married and divorced… I thought there was something more there.

Did you set out to make this different from AM/FM and your 2016 album, Rita Wilson?
It’s always about the storytelling. I’ve written and performed songs that tell stories, whether pop, country or Americana. The story is the consistent thread that ties all the albums together. This one is just much more intimate, so broken down.

You have done so many things in the creative sphere. Why did you wait to start writing and recording music?
It was fear, but you have to test yourself and put yourself out there. Fear of failure can keep so many of us from pursuing a creative endeavor. I thank Kara DioGuardi for suggesting I could write and should write. She said she would write one with me and she did more than one. Having that person say, “You can do this, and I’ll hold your hand in the process,” that was really important. You don’t want to do something badly. You want to be good at it, no matter what you do creatively.

That’s a nice story. What a good friend.
There’s this community that exists among songwriters, a generosity of spirit I found when I first started writing, that was really meaningful and gave me a lot of confidence. Actually, a really successful friend in this business—OK, it’s Bruce Springsteen—said this to me when I asked him, “What makes me think that I, now, at this point in my life, could start songwriting when you’ve been doing it so well all of your life?”

He said, “Creativity is time independent.” It made me feel like, “I guess this is the time when creativity in music is coming out of me.” I didn’t know it was lying dormant! He also really encouraged me and empowered me.

So this is the first of a “triplets” series: When do albums two and three come out?
I think the second in the spring, and the third, at the end of next year.

Can you  share if you have a favorite song out of all of these on the album?
They’re all like my babies, and it’s hard to pick a favorite. I guess one that’s extra personal is “Heart He Handed Down.” I wrote the song for my dad and my kids. Dad escaped a Bulgarian labor camp with a friend, during the war, made his way to Turkey, got a job on a boat, came to Philadelphia, went on shore leave and never came back to that job. He was going to live in America and be free from such oppression.

And my son, Chet, is three years sober. He has a recurring role on Empire (Chet plays Maron) and is in the band, FTRZ. Chet also sings harmony on “Heart He Handed Down,” and his mom and dad are proud of that.

Who do you listen to?
So many: I have such weird and eclectic taste, but I love Paul McCartney, Taylor Swift and Bruno Mars.

Of all the things you do, which fulfills you the most, if you’ve thought about that?
They’re all pieces of the creative puzzle. Acting is really rewarding, when you release yourself from who you are to play another character. In film, however, much of that can be out of your hands when it’s edited. Producing allows you to put all the elements together, to make something work as a whole. Painting is almost like meditation, and I can do it by myself.

Songwriting, singing and performing are the things closest to my creative heart. It feels like the most pure expression of who I am and what I want to say.

I was really taken by your piece in Harper’s Bazaar last September, in which you talked about life after breast cancer. Like your new album, it was intimate, but it was also humorous, optimistic, and it generously shared helpful information. How are you taking care of yourself now?
It’s the same as I wrote in that article. I don’t eat much red meat, but choose lean, white meat with no skin, and fish. I eat lots of fruits and vegetables, and I lowered my alcohol intake to three to five glasses per week. Oh, and “a glass” is smaller than you think it is! I walk, I swim, and in the winter, I ski, and I try to keep active, doing what I can, all the time. So I park the car far away, take stairs when I can—little things like that. I lost 20 pounds after my surgery and that helped other things, too, like keeping my cholesterol down.

What’s been the secret to your 30-year marriage to Tom? How about mental stuff? How do you take care of your brain?
By being mindful. I meditate when I can, and try for twice a day regularly, depending upon what kind of meditation I’m trying to do—whether I want to focus, go walking, deal with anxiety or go to sleep. Mindfulness is a good tool.

We support each other in so many different ways, and want to be married to each other. That’s really important!

Final thoughts about your music and life?
I believe everybody is a creative person. Maybe somewhere along the line, you got a message from a teacher or parent that you weren’t. Not everybody is creative in every single field, but you have to explore the areas you might have talent in. It’s worth exploring to find so much satisfaction later.