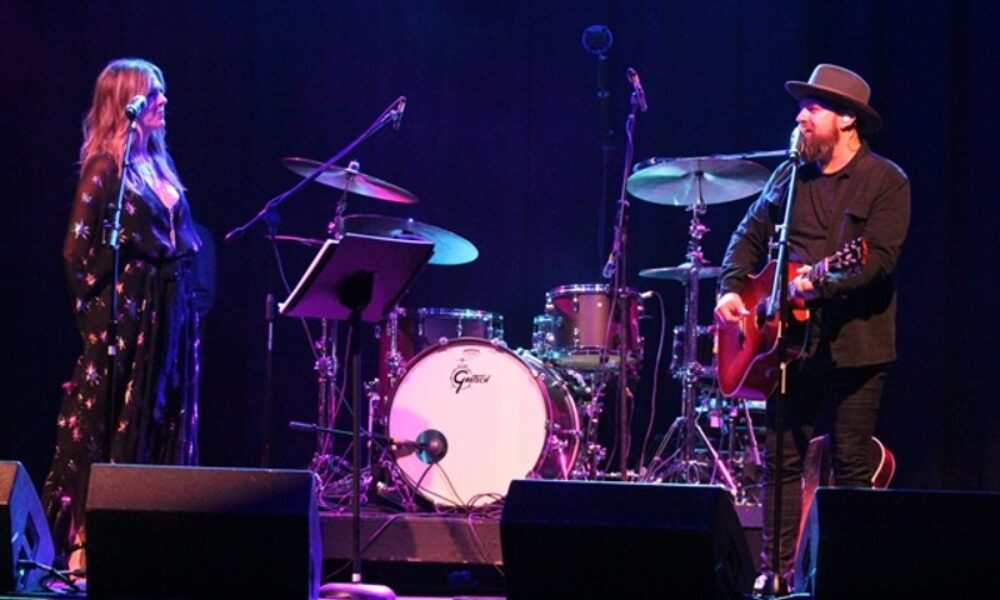 Kristian Bush knows how to share a stage and Rita Wilson is adept at lighting up a room, so together, they’re a winsome pair.

At the kickoff of their joint tour on Wednesday at Center Stage, Bush, the Decatur-residing, Grammy-winning Sugarland musician and Wilson, the successful multi-hyphenate (actress/producer/singer) played to an intimate crowd fortunate to experience their collaborative spirit. Taking the stage at 8:45 p.m., the pair dove in adventurously with the debut of a new song, “I Need You.”It became immediately apparent that the partnership between Bush – who has written songs with Wilson on her three original albums – and Wilson is one of equality. They shared the stage for the majority of the two-hour show, casually swapping stories and spotlighting their respective quick wit.Backed by a crisp five-piece band, including Brandon Bush on keyboards, Wilson and Kristian Bush also ceded the spotlight to the other when appropriate.

Wilson, in a flowing black patterned dress complemented by her radiant smile, bounced through the country-pop of “Big City Small Town Girl,” the lead song from her current album, “Halfway to Home.” Bush countered with his lackadaisical summer strummers “Bar With a Pool In It” and “Flip Flops,” (“Walk responsibly,” he joked at the end) before Wilson returned to share a story about the twosome drinking too much wine at a writing camp and coming up with “Pay Me in Wine,” a country-laced toe-tapper also on Wilson’s new release.While Wilson isn’t a powerhouse singer, she possesses a lovely voice capable of delivering an emotional punch, which she demonstrated on the plaintive ballad, “New Girl” (about the circular nature of cheating) and “Heart He Handed Down,” a beautiful song about family roots featuring Bush on mandolin and Brandon Bush on accordion.

She’s also a delightful presence who not only complements Bush’s affability, but also knows when to sit on the sidelines, as she did during Bush’s low-key performance of the Sugarland fan favorite, “Baby Girl.”Bush, meanwhile, brought out another musical buddy, Edwin McCain (“I’ll Be”), with whom he’ll be working in a new band and readying a release for later this summer. The Wilson and Bush tour will hit several more cities in June, including Nashville, Washington D.C. and Boston (they’re playing many City Winery locations – an appropriate-sized room for their storytelling-filled concert). It’s a rare pairing worth catching.